The first time I found the king of edible mushrooms

The elusive matsutake is an incredible mushroom — a true gift for any forager who is lucky or skilled enough to stumble upon this prized fungi. They’ve earned a reputation as the king of edible mushrooms, fetching as much as $1,000 per pound in Japan, where they fruit beneath stands of red pine in the fall. With a unique flavor that sends a burst of umami funk dancing down your tongue in a way no other ingredient (let alone mushroom) can, they more than merit that royal distinction.

Part of a matsutake’s intrigue is the rich, intoxicating aroma it develops when cooked, making it a wise choice for adding to steamed rice or other dishes that can be infused with that one-of-a-kind smell. My favorite recipe is Matsutake Chicken Teriyaki, cooked in the Instant Pot. The flavor of the mushrooms permeates the chicken, sauce, and vegetables, and in doing so, creates something that is at once comfortable and familiar, but entirely different.

As for foraging these mushrooms, just know your shit before heading into the woods. Matsutake can be easily mistaken for Amanita smithiana, which occur in the same spots and are deadly poisonous. Even a little bit will kill you. This is not a mushroom you can be cavalier about. Nor is it a mushroom for beginners to forage alone. But when you’re ready to seek matsutake with confidence, you’re in for a treat.

My first find came a little over a year ago. I was trudging through a tanoak forest with my head down, getting my ass kicked by some switchbacks, wondering where all the chanterelles had gone, when I nearly stepped on two white mushrooms barely peeking out of the ground. Could it be? I dropped to my knees and excavated them with my knife, my heart skipping as I noticed the tell-tale soil, sandy and gray, coating the ends of their stipes. I examined them in a dapple of light, then raised them to my nostrils and inhaled their damp scent. They smelled intensely, but of nothing I could recognize or name — they were simply shrooms of extraordinary funkiness. 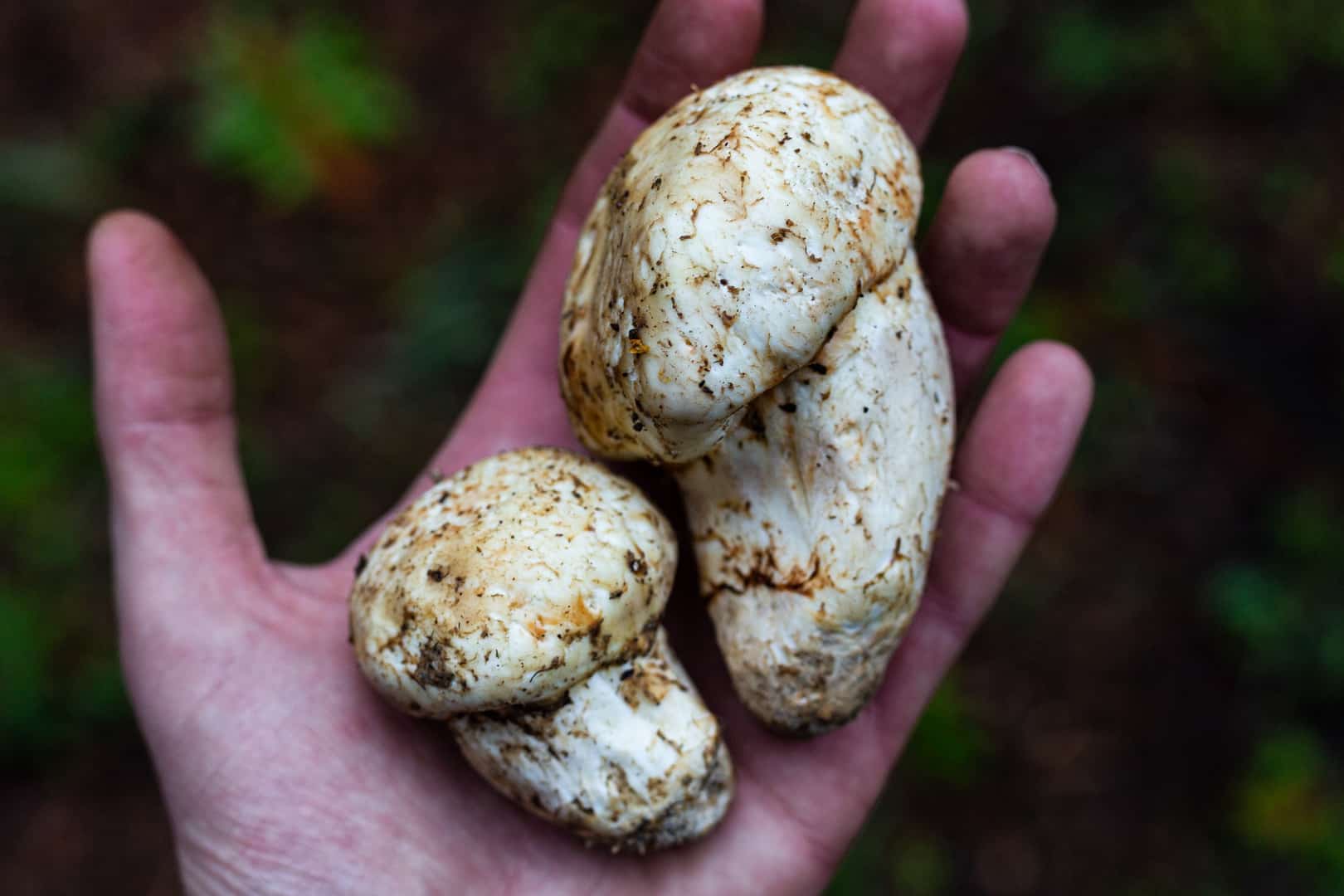 Incredible aroma. White, veiled cap with rusty patches. Creamy, white gills. Firm, tapered stipe. Fruiting in gray, ashy soil. Under a tanoak. I was 99.9 percent sure I had finally found the fabled matsutake, but that tiniest of risks wasn’t worth dying for, so I brought them to a local forager, Chris, who had decades of experience scouring Mendocino’s steep slopes for edible fungi. After quizzing me on the general whereabouts of my spot to ensure I hadn’t stumbled upon one of his own, Chris kindly inspected the mushrooms and congratulated me on my bounty. “You should go back,” he said in parting. “There are probably more in that area.”

I returned to the forest early the next morning and worked my way up the ridge where I had made my discovery the day before. Within minutes, I noticed a suspect rise in the duff — a “shrump” — beneath a tall and gnarled tanoak. I kneeled to the earth and swept back a thick carpet of decaying leaves and branches, revealing four pristine matsutake standing at attention like soldiers ready to march into my Instant Pot. It was another sublime discovery, somehow even more special than the last. I sat in reflection, overflowing with gratitude, feeling an unmistakable permanence in this fleeting instant, before harvesting the mushrooms and returning the duff to its former state.

Us foragers, even the ones who do it occasionally, live for moments like these. 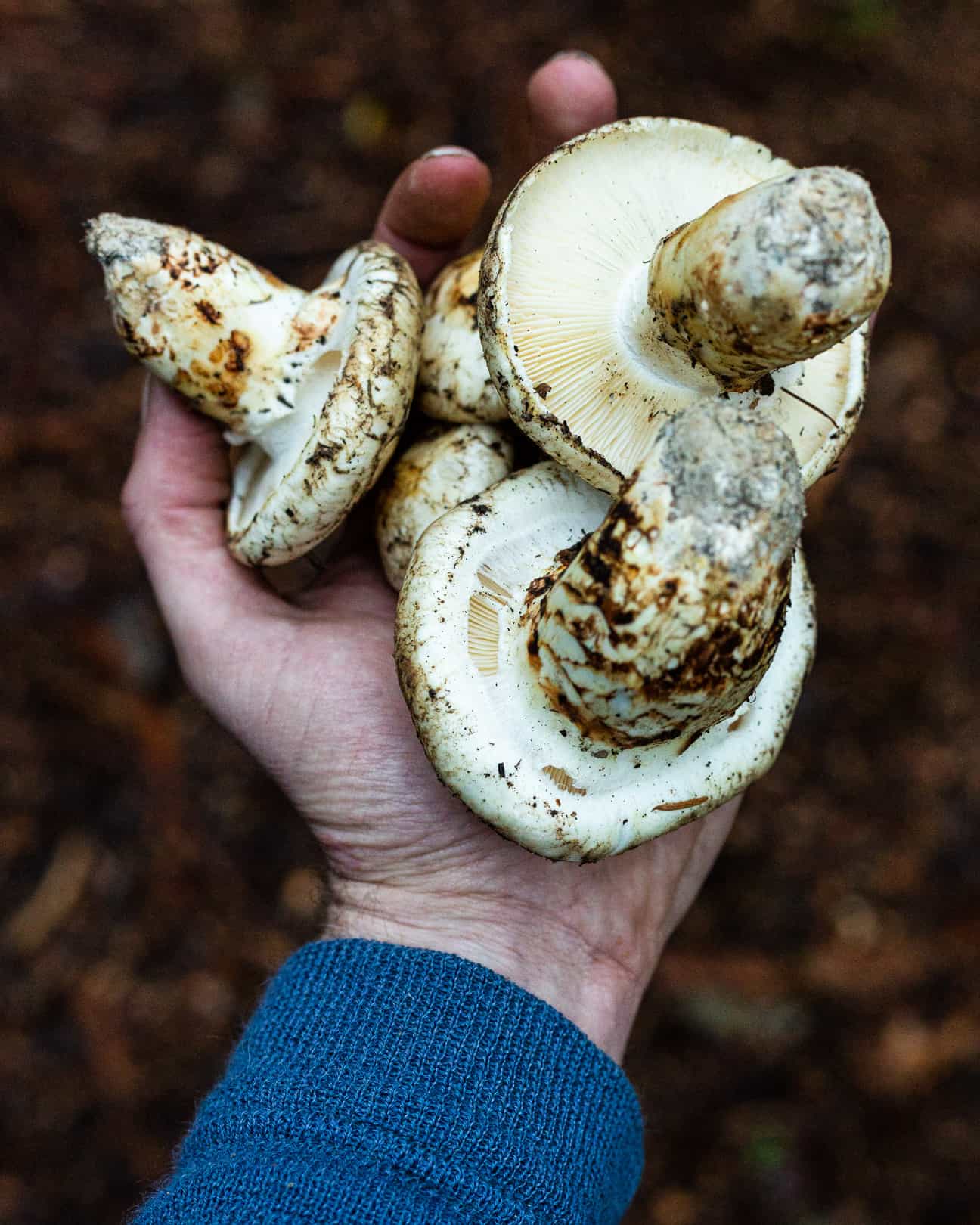 Hiding in a huckleberry bush, I peered up and down the trail, then listened for distant voices drifting amongst the trees. I wasn’t about to let a cyclist or trail runner — or god forbid another forager — see me emerge from this hallowed ground. Alone and free to depart, I breezed through the sunny tanoaks with which I felt a new relationship blossoming, and hiked down into the familiar, dark, mixed forest of redwood and Douglas fir, where all the chanterelles should have been, but weren’t. No big deal. There had been something even more beautiful waiting for me up on the ridge.

Chris, by the way, messaged me the next day to mention that my visit had motivated him to check a cherished spot of his own. He ended up with a backpack full of matsies, and thanked me for inspiring him to lift some logs in search of shrooms. I like to think Chris’s success was his reward for the kindness he showed me — a whirlwind of matsutake magic we were both lucky enough to get swept up in for a little while.

Here’s to hoping you find some magic of your own flavor. Just like those two matsutake I nearly trampled, it’s out there waiting for you to stumble upon, whether you know it or not. And it’ll find you someday. That’s what makes it magic. 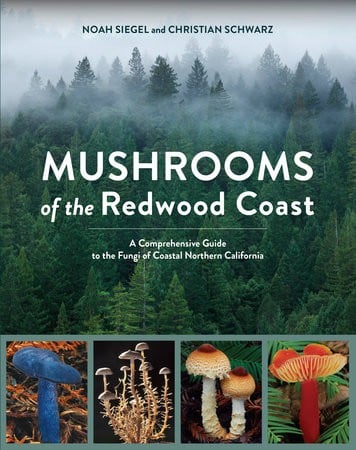 Mushrooms of the Redwood Coast

Up here on California's North Coast, mushroom foragers refer to this spectacular book as "the Bible." If you're exploring fungi in this neck of the woods — edible or otherwise — all the answers you seek are within this weighty tome. Local, comprehensive, and full of beautiful photos, this is one of my most cherished books. It's a little too big to bring out into the field, but then again, you can always put the digital version on your phone.